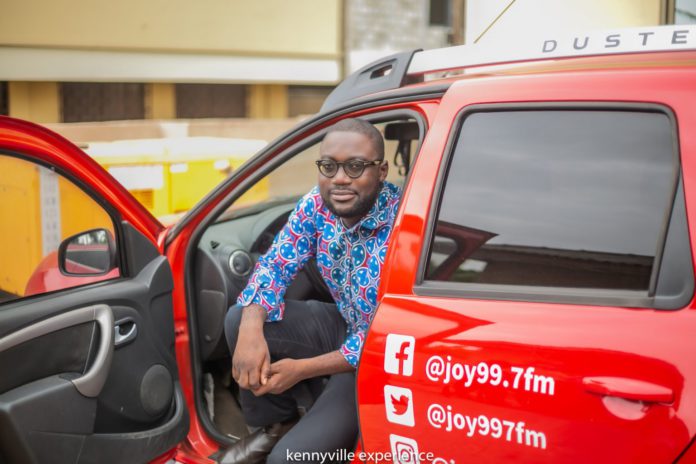 I guess it was God’s plan, with a lot of help from my parents, says Daniel, as he flashes one of the smiles he has become known for on television.

The host of JoyPrime TV’s flagship morning show, Prime Morning, and the midday news on JoyNews TV, NewsToday, is responding to my query about how he transitioned from studying Geomatic Engineering in Kwame Nkrumah University of Science and Technology to working as a full-time journalist.

I get asked that A lot to be honest, he continued. Funny enough it was a very easy choice to make. I even feel like I delayed the move.

Considering his meteoric rise in the media landscape, one is tempted to agree with the broadcaster. For two years, Daniel dazzled Ghana as host of the award-winning Super Morning Show on Joy 99.7 FM. He stepped into the enviable spot once occupied by the legendary Komla Dumor after only six months in the Multimedia Group but he soon became a natural part of the morning routine of millions across the country.

It, therefore, came as a shock to many when he announced his move from “Ghana’s favorite Morning Show” to JoyPrime after the management of Multimedia Group decided to rebrand the entertainment focused station to include current affairs content. Surely, these achievements suggest that he was born to do this.

I was a little scared in the beginning. I didn’t have any immediate family member who showed interest in journalism. Conversations about careers hovered around engineering and law. It didn’t seem like an option to me until I first went to Skyy.

Daniel is referring to Skyy Media Group, one of the leading media houses in the Western Region where he worked for two and a half years before moving to the Multimedia Group in Accra to work as a broadcast journalist with JoyNews in June 2017. But his media journey began in 2008.

I was 17, fresh out of Mfantsipim School [which he always mentions with a fond smile] and I had no idea what to do with the 15 months between secondary school and University.

Everyone I knew was teaching in a private basic school but I knew I wanted more. Because I was active in the Writers’ and Debaters’ Club as well as the Drama Wing of our Cultural Society back in school, I knew I wanted to do something which involved public speaking or meeting new people every day.

“But it still did not occur to you to be a journalist?” I asked.

No, he said with a laugh, AT the time I wanted to be a receptionist in a corporate institution. I thought it would be fun. Journalism was actually my mother’s idea. Come to think of it she never told me why.

Whatever her reason was, Mrs Rebecca Dadzie, now retired Western Region Director at the Ghana Education Service, gave a remarkable hint. The 17-year-old went to Skyy Media Group as an intern and immediately threw himself into his duties, covering a wide range of events and telling stories that impacted the city and region.

The highest point for me in that period was the 2008 election, he said with a nostalgic tone. I felt like I had the front row seat at the cinema. That election was very decisive because an incumbent lost. Also, because there were three rounds and the terrain were very tense.

I feel like that period set me on the path I am on today. I met great journalists like Seth Kwame Boateng, Philip Osei Bonsu, Kweku Temeng, Francis Abban, Ebenezer Afanyi Dadzie for the very first time. I worked with some of them and learned from them. They made me want to pursue this job further.

But he did not. After more than a year in the media, Daniel opted for the College of Engineering at KNUST.

I was making the safe choice. I was afraid I won’t make money as a journalist, he laughed. It wasn’t until National Service that I entertained the idea of the media again.

And that the idea came from the most unlikely place.

Well I was working at the Department of Urban Roads and I was running a private business with a few friends, he began.

I was a road construction engineer, spent most of my time supervising laborers who were patching potholes. But my boss at DUR, John Owusu Duah, kept suggesting I go into journalism.

Funny enough he did not know I had experience in the field, but he is someone I respect a lot and I began entertaining the thought of a return. My mother did not like the idea. But my dad did not mind. I think he felt I would not do this for long.

Perhaps his father, Nicholas Dadzie agreed because he had also made a transition of his own. Mr Dadzie was commercial manager of a state-owned Agric enterprise but at the height of his career, he stepped away to start a farm.

I really respect him for the choice. I think it reinforced my mentality that it does not matter what one does. Success depends more on your attitude than your circumstances.

In the two and half years following the decision to go back to the media, Daniel rose from a newsroom reporter to Deputy News Editor at Skyy News. He also became host of the flagship English news bulletin and the only evening political talk show in the run up to the 2016 election. It was no wonder that his efforts caught the eye of management of Multimedia Group Limited who recruited him soon after the elections.

In his time at Multimedia, Daniel has interviewed a host of dignitaries including the former President John Agyekum Kufuor, ace investigative journalist Anas Aremeyaw Anas and many others. In 2018, he picked up the RTP Award for Radio Morning Show Host of the Year.

In 2019, Daniel worked with the BBC as an intern as part of a training programme. During that short period, he made appearances on major programmes like Focus on Africa and NewsDay.

It is my best experience so far, he said. Working side by side with the greats like Sophie Ikenye, Peter Okwoche, Bola Mosuro, Hassan Arouni, and our own Akwasi Sarpong was a dream come true. It made me feel like the journey has been worth it so far and there is still a lot more to strive for.

The broadcaster’s friends call him a workaholic. But even the stiffest people have to relax, don’t they?

For me kicking back means Netflix and chill, by myself, he said with that familiar twinkle. I also like reading, and I try to spend some time on my faith. That’s about it for me.

Contrary to rumors, Daniel insists he is single.

Single and not really searching. I have a lot on my plate now with work and everything else.

Perhaps the next time we talk to Daniel, his relationship status would have changed. We pray his faith eventually leads him into the arms of a woman! What is certain, however, is that next time the hardworking broadcaster would have more successes to share with us.

All the best Daniel!