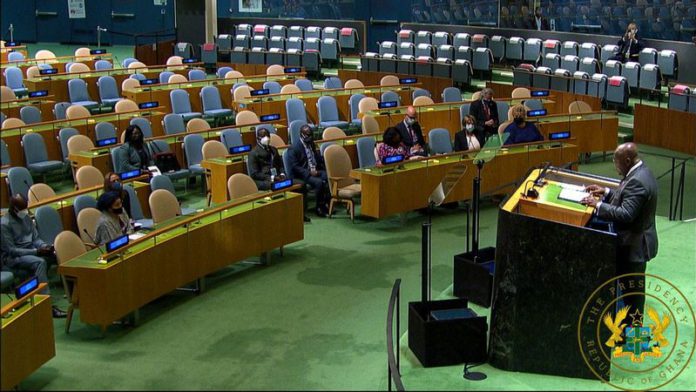 The Co-Chair of the Group of Eminent Advocates of the 2030 United Nations Sustainable Development Goals has urged world leaders to hasten the implementation of the 17 UN SDGs in order to build a fairer, healthier, safer and more prosperous world for all.

According to President Akufo-Addo: “As our world strives to deal with the challenges posed by the pandemic, we have to turn the crisis into an opportunity, and ramp up actions necessary to achieve the SDGs.”

Speaking at the 2021 SDGs Moment on the ‘Decade of Action’, on Monday, 20th September 2021, at the UN Headquarters, the President recounted the 2019 Declaration, where world leaders declared the years 2020 to 2030 as the Decade of Action, and called on all Member States to step-up and scale up significantly actions to give the world a fighting chance of achieving the SDGs by 2030.

He indicated that, a few months after the historic Declaration, the entire world was hit by the COVID-19 pandemic, which has since had a devastating effect on lives and livelihoods, and significantly undermined prospects of achieving the SDGs.

“Available estimates indicate that, in 2020 alone, some 124 million people in the world were pushed back into extreme poverty, with some 132 million people experiencing hunger as a result of the pandemic.

“The net effect of these adverse developments is that our world is unlikely to eradicate extreme poverty and hunger by 2030,” the President said.

Describing the quest to achieve the SDGs, in the wake of the pandemic, as becoming more daunting, he urged world leaders “to think big, act big and act smartly.”

As countries take action to address the effects of the pandemic, President Akufo-Addo stated that “we cannot afford to perpetuate unsustainable development, by disturbing the critical balance between economic, social and environmental imperatives.”

He continued: “Our recovery measures and interventions cannot and should not be de-linked from actions to ensure prosperity, promote peace, protect people, and safeguard the planet. Undeniably, the SDGs provide a sound framework for responding to the pandemic, and putting communities, businesses and ecosystems on a sustainable pathway.”

Proposing “two essential ingredients for the task of building forward better, and scaling-up actions to hasten progress towards the realisation of the SDGs”, the President noted that, firstly, there is a pressing need to bridge the $2.5 trillion SDGs financing gap, especially for developing countries, where the human development deficit is indeed greatest.

“With an estimated $360 trillion available in global financial assets, as of 2019, the resources to finance the SDGs are certainly available. The question raised is whether the rich countries of the world are, thus, prepared to accept the new paradigm of the SGDs, and play their part or not,” he noted.

The President’s also touched on the world’s ability to access and deploy innovative solutions and new technologies, that will greatly speed up progress towards the goals.

“New forms of social practice and organisation, as well as new and improved technological products and processes, are key enablers for achieving the SDGs.

“Whilst embracing innovation, deliberate steps should be taken to discourage innovations that contribute to environmental degradation, that are disruptive of livelihoods, and that exacerbate inequalities,” President Akufo-Addo added.