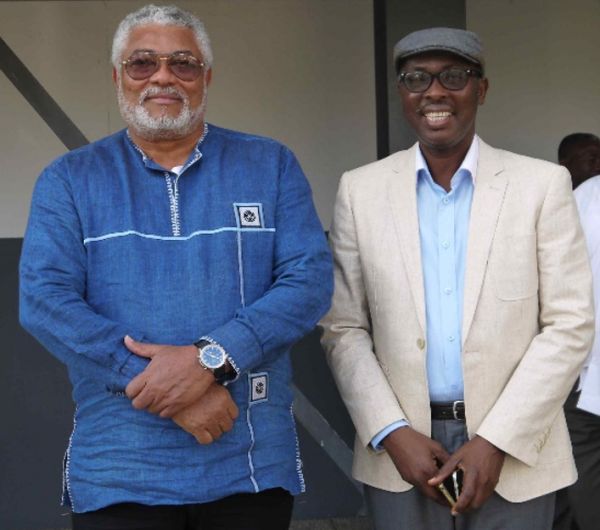 We were related, very close at that, through marriage. He, to one of my wife’s senior sisters, and I, through one of his wife’s junior sisters – the youngest, in fact.

If he had not done the “coodeta” of December 1981, I would most certainly not have had my present wife of so many years. The last time I counted it was 37 years.

After the success of the coup, to consolidate and operationalise their plans and objectives, the coup leaders started scouring about to get the personnel to “help”, that is, man the government machinery.

Mr. Chris Bukari Atim, a former schoolmate of mine (remember him?), was the spokesperson of the coup, which was promulgated as the Provisional National Defence Council (PNDC). In around March or February 1982, I got an urgent message from him to proceed from Tamale to Accra, to join the band of young merry men and women coalescing into a credible coterie of administrators and political leaders.

After a brief meeting with Mr. Atim, I was given my marching orders with two others to take over and “restructure” the Ghana Film Industry Corporation – now TV3 – in an Interim Management Committee (IMC) arrangement. As a PNDC appointee, that’s how I crossed paths with JJ. We did not become friends or anything like that, but he was PNDC chairman and we were all his subordinates in the running of the state. The rest, I am sure, we can leave to history, for the time being.

By 1987, the PNDC had “matured”, as the late Adali Mortey, a very brief Secretary of Information put it, and many far-reaching actions had been taken regarding the economy, state security, culture, (including chieftaincy and religion), the environment and even responsibilities of husbands to their families in the Head of Family Accountability Law and also the Intestate Succession Law to protect widows. By the time the PNDC had morphed into NDC, it had laid the foundations for many of the progressive laws and national initiatives we now take for granted.

Under the auspices of the ERP, SAP and PAMSCAD, which were fashioned out by Ghanaian expertise (technocrats, academics and captains of industry) in economics and allied fields, Ghana received the plaudits of international organizations like the Bretton Woods bodies that had earlier treated the country as a pariah, due to the coup, and money started flowing in from these institutions and other “development partners”. By the time of the inauguration of the 4th Republic, Ghana was once again a respected member of the international community.

In judging the Rawlings era in our history, one can justifiably be distracted by the many human rights abuses like a three-year curfew, suppression of the freedom of expression, political intolerance, and more, as to miss out on some gems in plain sight. Culture is an example. The National Commission on Culture (NCC), a ministry in charge of chieftaincy and religious affairs, a religious bodies registration law (and God knows, don’t we need more of that at present?) all came into play at this time.

To give meaning to the cultural policy of Ghana (one of which I helped draft under Professor Hagan’s chairmanship of the NCC, the late Dr. Mohammed Ben Abdallah being the first chairman) such cultural and intellectual heavyweights were put in charge. It was therefore very easy to decide, for example, when the Chinese offered us a stadium or place for cultural activities, a national theatre, the national theatre won out and today it stands as one of our architectural attractions of the capital. The national theatre served as the mother theatre, while all regional capitals had “Centres of National Culture” to provide locally generated programmes.

Rawlings never tried to make religious hegemony a part of his MO. A so-called national cathedral favouring only one faith would never have crossed his mind, though two Roman Catholic priests were among his confidants, namely, the late Reverend Father Dr. Vincent Kwabena Damuah, original member of the PNDC and later, founder of Afrikania Mission and Rev. Fr. Andrew Campbell, the well-known philanthropist whose work with lepers has earned him much respect. His relationship with these men of cloth may have had a spiritual dimension, which he kept well out of his politics, but I know it was the anti-corruption drive of Fr. Damouh and the human rights work of Fr. Campbell that he most admired and respected.

During his long tenure in the executive office, he rubbed many people up the wrong way. Such people have never forgiven him nor would they forget and even when he died last year, and there was all that mourning, some took the opportunity to vent out their pent up anger by publishing very critical and scathing opinions. He was mercurial, acerbic, bullying, autocratic and unforgiving (traits I was most uncomfortable with and expressed openly in many commentaries), but he had a highly developed empathy for the underdog. That was why, with all the campaigns people like me hurled at him, he still enjoyed considerable support from people who felt society had dealt them a bad hand and found in him a champion – and they were many. To them, what they saw as his charisma simply added to the TLC he extended to them…

And that was how he related to the Islamic community, which he felt the Ghanaian state had been marginalizing since independence. In his own way, he was also responsible for wounding Muslims’ sensibilities when during the June 4, 1979, junior officers uprising, of which he was leader, their actions led to the destruction of a mosque in the central part of Accra.

He encouraged Muslim unity, to face officialdom, out of which grew the office of a national chief Imam and very significantly, he made the Muslim holidays of Eid el Fitr and Eidr Adha into national public holidays mirroring the Christian holidays of Christmas and Easter. He did these without any pledges to his (g)God nor putting up any state-sponsored mosque or cathedral to prove anything. As to the new grand mosque at Kawo Kudi Junction in Accra, he helped put right the wrong of 1979 by facilitating the acquisition of land for the new mosque. No judges or other major state-owned buildings were pulled down as we were to see later with a so-called national cathedral being forced on us by Nana Akufo-Addo and his apologists. The construction of the mosque was not the preoccupation of the state nor was it promoted as a priority of priorities at any time of our history, like the cathedral.

In the matter of Muslim holidays as national holidays, I remember, as a very young schoolboy, during the second republic, there was much talk about the two Islamic festivals of Eid el Fitr and Eid el Adha becoming national holidays.

The proposal was rejected outright by the government of the day and Muslims were simply asked to take the day off during those particular feast days – it remained that way until Rawlings’ PNDC reversed that discriminatory policy…The Islamic community has so much to be thankful to Rawlings for. And so today, when I see some in the Islamic community and pitiable types in government, trying to undermine the integrity of their own faith by running to prop up discrimination, in the form of this proposed forced Christocentric “national” cathedral on the nation by the scions of those who said no to Muslim national holidays, I wonder if they know what they are letting themselves into…It is not just the building, but its intent, long in gestation: The domination of one faith over all others in the Republic of Ghana.

Constitutionally, the Republic of Ghana is a secular state, with the freedom of worship guaranteed, but with this cathedral being promoted as the “mother church of Ghana”, where our integrity as a nation would be focussed as in a shrine, we will be, before long under the rule of one faith! Already, there is talk of the place becoming the venue for the swearing-in of Ghanaian presidents and such things.