The matchday 27 of the 2020/21 Ghana Premier League has ended at the various stadia with shocking results.

Hearts of Oak under Samuel Boadu continued their revival as they record an emphatic 2-0 win over Berekum Chelsea at the Accra Sports Stadium.

At the Nana Agyemang Badu Park at Dormaa, Asante Kotoko were held to a goalless game by Aduana Stars.

At the Theatre of Dreams at Dawu, Inter Allies, which sit bottom of the league log smashed Medeama SC 3-0 to keep their hopes alive.

Below is the full wrap up of the matchday 27:

Hearts of Oak on Sunday evening, recorded a 2-0 win over Berekum Chelsea at the Accra Sports Stadium to reclaim top spot on the Premier League table.

The win means the Phobians have now opened a two-point lead over rivals Asante Kotoko.

Benjamin Afutu put Hearts in the lead in the 16th minute, heading home from a Salifu Ibrahim corner.

Just before the half-hour mark, Hearts doubled their lead through Kwadwo Obeng Jnr.

The hosts were able to hold on to their 2-0 lead to secure all three points and maintain their lead at the summit of the table.

The Phobians have now gone on a five-match winning streak and have not conceded a goal in those five games.

Substitute Andy Okpe opened the scoring for Inter Allies in the 71st minute before Nafiu Sulemana scored a brace in the 89th and 90th minutes to seal victory for the relegation-threatened side.

Despite the win, Inter Allies remain bottom of the league table with 26 points.

At the Len Clay Stadium at Obuasi, Ashgold were silenced by Legon Cities.

The Royals defeated the Miners by a lone goal.

The only goal of the game came in the 39th minute through defender Issaka Mohammed who pounced on a rebound from a free-kick to give the visitors the lead.

At the Nana Fosu Gyeabour Park, Bechem United were held to a 1-1 draw by Elmina Sharks.

The draw means both teams have gone five games without a win.

Bechem players and the technical team arrived at Nana Fosu Gyeabour Park in a Cadillac Limousine.

Benjamin Bernard Boateng put the visitors in the lead in the 69th minute, and Sharks seemed to be heading to victory until Emmanuel Boakye drew Bechem level from the spot in the 74th minute.

The first half of the game ended goalless as both teams failed to find the back of the net.

However, substitute Samuel Boakye won the game for the visitors in the 80th minute.

The defeat moves King Faisal back into the relegation zone.

In the 52nd minute, Enock Esubonteng put the home team ahead via a cross from the edge of the box.

However, Richard Addai found the equaliser for the visitors 10 minutes to time after Abubakar Ibrahim failed to clear the ball.

WAFA kept searching for the winner and were duly rewarded in the 89th minute after Justus Torsutsey’s cross was directed into the net by a Dwarfs player.

Goalkeeper Razak Abalora put up a Man of the Match performance but it was not enough as Kumasi Asante Kotoko dropped another two points in the title race, in a hard-fought 0-0 draw against Aduana Stars at the Nana Agyemang Badu Park on Saturday.

Elsewhere, Liberty Professionals came from behind to beat Dreams FC 2-1 at the Red Bull Arena in Sogakope.

The visitors began the game on the front foot as Agyenim Boateng gave them the lead just two minutes into the first half.

Liberty equalised from the spot in the 51st minute through Abraham Wayo after Kweku Karikari was brought down in the box.

Maxwell Ansah then completed the comeback for Liberty in the 73rd minute.

Liberty remain in the relegation zone despite the win.

Karela United were held to a 1-1 stalemate by Accra Great Olympics at the Crosby Awuah Memorial Park in Anyinase.

Diawisie Taylor scored his 16th goal of the season to put the hosts ahead before the visitors levelled through Samuel Abbey-Ashie Quaye. 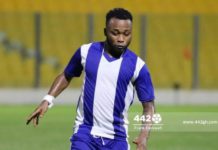