A teenage girl was shot and killed during a robbery as she worked a shift at a Burger King.

Chilling footage of the shooting appeared to show a masked robber waving a handgun at shocked staff in the early hours of Sunday morning.

Officers said he had gone to the fast-food outlet at about 1 am before he ‘pistol-whipped’ a male customer and punched a female manager in the face.

At the eatery in Manhattan, New York, one employee, 19-year-old Kristal Bayron-Nieves was gunned down during the robbery and killed.

Police said that after the shooting and leaving the staff member dead the man made off with $100.

According to reports Kristal Bayron-Nieves had just started her job there three weeks ago and eyewitnesses said she had given the robber the money.

But as he turned to leave he turned around again and shot the woman in the torso, the New York Post reports.

She was taken to a nearby hospital but was pronounced dead

A police source told the outlet: “She didn’t deserve to be mowed down while working at a Burger King.”

Her family said she had already asked for more security there and moved today shifts after fears for her safety when she left work.

She was said to have wanted those changes “because she is only 19, and she has more than 50 homeless people sleeping in front of the store,” her mum, Kristie Nieves, 36, said in Spanish through a translator, friend Nathalie Pagan.

She said she felt guilt for waking her to go to her shift and that a ‘young admirer’ who stopped by to see her at the restaurant most nights, bringing her a flower, was also there during the tragedy.

The suspect, who fled the scene, has been described as a ‘slim male who was wearing dark clothes and a black mask.’ 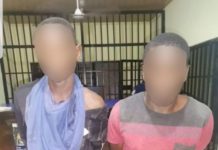