VIOLENT DISRUPTION OF REGISTRATION PROCESS IN AJUMAKO BISESASE BY THUGS LED BY NPPs RASHID ETUAFUL AS THEY CAUSE HARM AND WRECK MAYHEM AT REGISTRATION CENTERS.

Good morning to distinguished friends from the media. I welcome you to this press conference on behalf of the Leadership of the Regional Communications Bureau. We remain grateful to you for availing your esteemed platforms to us to address a very worrying development that played out in the ongoing voters registration exercise yesterday in the Ajumako Enyan Essiam Constituency.

The Minister of Transport yesterday led about 50 thugs believed to be members of the NPPs vigilante group, invisible forces, to cause mayhem at the 21 registration centers in Ajumako Bisease, which is the hometown and stronghold of the incumbent MP, Hon. Cassiel Ato Forson.

Mr Kweku Ofori Asiamah who led yesterday’s attacks, has been holding series of sinister meetings in this Constituency and anytime he is in the Constituency, violence erupts against innocent citizens perceived to be NDC sympathizers. The leader of his gang by name Ali who is driving one of the unregistered Pick Ups, fired several gun shots and bolted.

Sadly, this unfortunate conduct of the thugs were in the full glare of the police officers and the military men deployed to the various registration centers, yet they did not even lift a finger.

We are reliably informed that these incidents happened after Mr. Lord Commey (Director of operations at the Jubilee House), Richard Takyi Mensah (NPPs Regional Secretary), Mr. Robert Kutin (NPPs Central Regional Chairman), Mr. Kweku Ofori Asiamah (Minister of transport), held a meeting with the Divisional Police Commander, Rashid Etuaful and other NPP executives at about 1pm at the DCE’s office yesterday. We understand this is where they plotted these disturbances at Ajumako Bisease because the total number of registered voters which stands at 10,000 is higher than that of the number from Rashid’s perceived stronghold.

Yesterday, at exactly 6: 45am on the NPPs Constituency platform, more sinister discussions were held to that effect. In the referenced conversation, they planned to give a surprise birthday wish to Hon. Ato Forson by “going a little bit rough at the various polling stations in Ajumako Bisease”. Surprisingly, this illegal operation was led by the NPPs PC, Rashid Kwesi Etuaful.
They indeed unleashed mayhem at the various registration centers which led to many NDC registration agents sustaining injuries with most of them receiving treatment at the Ajumako District Hospital.

Ladies and gentlemen of the press, It must be placed on record that the activities of these NPP armed hoodlums are financed by Mr John Kofi Mensah, Managing Director of ADB. Apparently this is his assigned tasks by the NPP Govt of Akufo Addo inorder to maintain his job at ADB. The NDC is fully aware of his nefarious activities with the vigilantes including the release of those unregistered Pick Ups they are using to perpetuate this heinous criminal activities and wish to remind him that Tomorrow is Pregnant.

Friends from the media, the NDC in this Region is totally aghast at what appears to be State sanctioned violent attacks on innocent citizens in this Constituency to frustrate and disenfranchise citizens in perceived opposition strongholds from acquiring the voters ID Cards that will qualify them to exercise their democratic right to choose their preferred leaders come 7th Dec 2020 and we condemn it in no uncertain terms.

We in the NDC are not surprised by this posturing of Rashid Etuaful, Robert Kutin and their NPP against the good people of Ajumako Bisease because for almost 4yrs under Akufo Addo, this non-performing Govt cannot boast of significant achievements in the town except wickedly halting transformational projects initiated and commenced by the visionary NDC Govt of John Dramani Mahama and the dynamic MP, Hon Cassiel Ato Forson such as the Nursing Training College, College of Education, road projects etc in the town and many others in the Constituency as a whole.

The NDC demands the immediate investigations, arrests and prosecution of all involved in this dastardly act and to remind our Security Agencies of their oath to serve Ghana and not to serve the NPP. We encourage the thousands who were not able to register yesterday due to this blood bath to come out and do so today and also during the mop up exercise scheduled for the weekend. To the sponsors, perpetrators of this crime and some of security personnel complicit in this barbarism, we wish to remind them power is transcient and that father for all is no longer in the dictionary of the NDC. 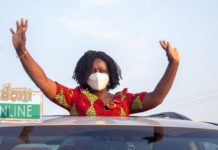 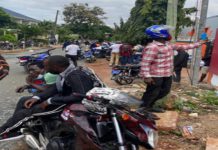