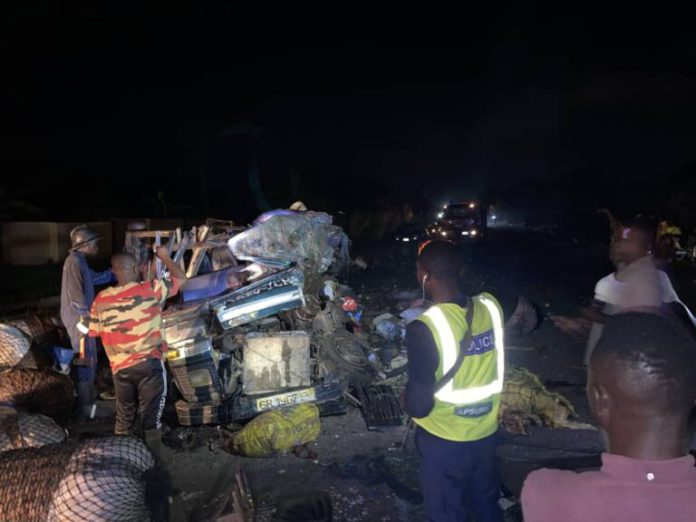 Another fatal accident at Peki Avetile in the South Dayi district of the Volta Region has claimed the lives of four persons.

Preliminary investigation by the Volta Regional Police Command indicates the cargo driver with a passenger on board was transporting bags of Cement from Accra to Dambai.

On reaching a section of the road, in front of the College of Education (GOVCO) at Peki Avetile, along the Asikuma-Kpeve highway, it collided head-on with the Mercedes Benz bus which was carrying foodstuffs and passengers from Oti Region to Accra.

The Benz bus landed in the middle of the road while the truck veered off the highway into a minor road on its nearside following the crash.

The truck crashed into a container provision shop about 100 meters away.

The deceased have been identified as three females and the driver on board the Mercedes Benz who died on the spot.

The bodies of the three females have so far been identified with efforts underway to identify that of the driver.

Seven other passengers including the truck driver sustained varying degrees of injuries and were rushed to the Peki Government hospital for treatment.

The bodies of the deceased have also been deposited at the same hospital morgue for preservation and autopsy.