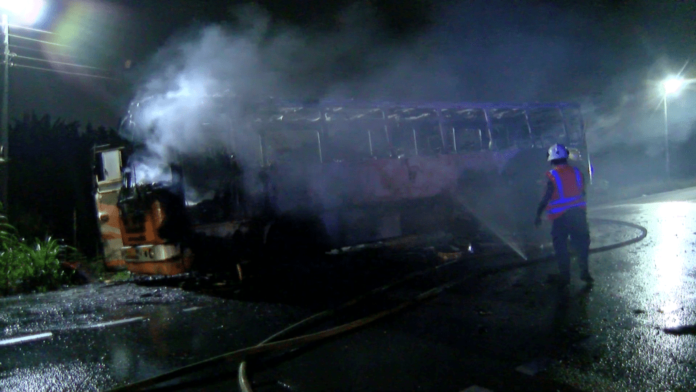 Maxwell Akrofi, the driver of a Metro Mass Transit (MMT) bus that caught fire at Ayigya near the Tech Police station in Kumasi, has broken his silence.

The bus with about 63 passengers onboard to a prayer meeting caught fire after the ignition of the vehicle developed a fault in the middle of the journey.

They were heading to the Agya Prayer Camp, a popular prayer centre at Ejisu-Adadientem, run by the Church of Pentecost.

Though the bus with registration number GS 3611-Z was burnt beyond recognition, all the passengers escaped unhurt.

Mr Akrofi, recounting the incident, said the situation but for divine intervention and his experience over the years would have turned out differently.

According to him, they set out at about 6:00 pm while the incident occurred around 8pm.

“I smelt an unusual scent and heard a noise which came out as if the start was stuck from the engine so I pulled off and told all the passengers to get down and then checked the battery and removed it from the engine.

“At first I thought it was an electrical fault but later realised sparks of torches beneath the engine which intensified and razed down the bus as the passengers helplessly watch on,” he narrated in an interview with Kumasi-based Akoma FM.

According to the driver, the pastor at the prayer camp had called on Saturday to say he had a vision that he had been involved in an accident and was sent to the mortuary.

“So he told me to be very careful with my passengers wherever I may find myself and asked me to see him immediately,” he recounted.