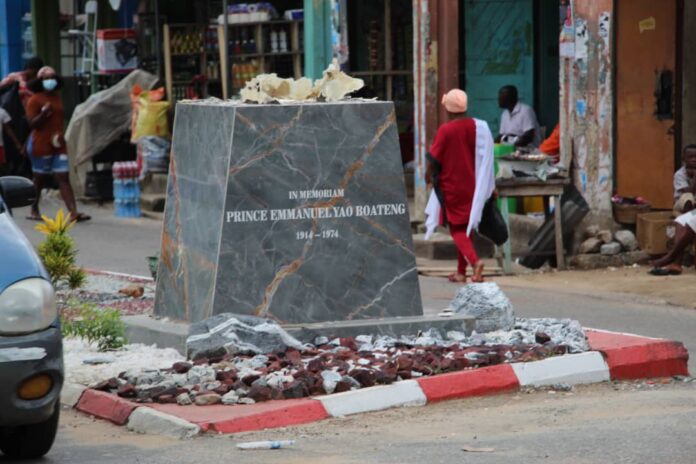 For failing to meet a 14-day ultimatum to replace a statue he destroyed, the Children of late Prince Yao Boateng have sued the New Juaben Traditional Council, its paramount chief and the New Juaben South Municipal Assembly.

The suit is scheduled for next Wednesday, May 12, 2021 at the Koforidua High Court.

The Paramount Chief, Daasebre Prof. Oti Boateng, together with the New Juaben Traditional Council called for the bust, which was erected in honour of Oheneba Emmanuel Prince Yao Boateng, to be pulled down on March, 19 this year.

The Council described the action by the family as gross disrespect to the Yiadom Hwedie stool and the statue as an “offensive and dirty trick.”

They said the decision to forcibly pull down the statue was necessitated by failure by the children of the late Oheneba Yao Boateng to remove the statue, having promised and apologized when summoned to the palace on February 5, 2021, by the Council.

However, in a letter to the Traditional Council and copied to the paramountcy and the New Juaben South Municipal Assembly, Osafo Adu-Amankwah, solicitors for the family described the move as illegal.

“Your destruction of the bust and your subsequent press release explaining your reasons for the above-mentioned destruction is absolutely illegal even if the bust is offensive to you. Issues that call for destruction or demolishing, there are laid down procedures by the law that one ought to follow which your office should be aware of,” part of the letter read.

The letter stated that the Council erred by destroying the bust, because according to them, all public spaces and naming are vested by law in Municipal District Assemblies (MMDAs) and not the traditional council.