The most fulfilling aspects of being a champion athlete are the privileges that come with the space and Ghana’s first boxing world champion, D.K. Poison, who assumed iconic status in 1975 for winning the WBC featherweight title, became exposed to such privileges.

D.K. Poison was served his first glass of champagne by then Head of State of Ghana, Gen I.K. Acheampong at a special reception upon his arrival in Accra, with the title he had snatched from Mexican Reuben Olivares.

This was after he had been decorated with the Grand Medal of the Republic of Ghana, one of the nation’s highest honours, on the tarmac.

He sat on one couch with the head of state and had a conversation – one very great privilege his new status had earned him.

He was now a celebrity and had to deal with the demands of public life. “It was hectic for me because anytime I went somewhere crowds gathered. I don’t know how to describe the feeling,” he said.

His welcome at the airport is something he describes as mixed feelings.

“Tears flowed down my eyes when I saw the crowd.  The only crowd I could compare it to was when General Kotoka died. People lined up from the cathedral to the Osu Cemetery. But mine was exceptional,” he said.

The champion recollected that the crowd that greeted his arrival was all the way from the Airport through Golden Tulip Hotel, past Accra Girls Senior High School (at least 4 km).

These accounts are part of highlights of D.K. Poison’s documentary ‘The Boxing Loan’ which will be aired on the Joy News channel (DSTV 421 and free-to-air) ahead of the commemoration of his 45th anniversary of annexing the title which falls on September 20. 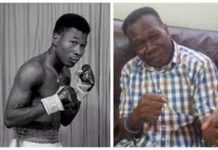