According to Dr Wenhong, with the disease not effectively controlled in the United States (US) and Europe, in addition to an exponential increase of new cases in Africa and other developing countries such as South America and India, there is great uncertainty to the global fight against the disease.

He subsequently predicted a possible outbreak of a second wave of the COVID-19 which will affect the international community.

Hon Aponkye begs for cash to continue his ‘koko’ project, reveals how much he spends

“At present, the pandemic has reached a critical stage. Globally, Europe and the US have not been effectively controlled for the time being. However, in Africa, South America and India, where the economy is less developed and medical resources are insufficient, new cases have increased exponentially, which brings great uncertainty to the global fight against the epidemic.

“I said repeatedly two weeks ago that it’s unlikely the pandemic will be over by the summer, that it will largely last till the next year. Recent developments have confirmed that. The number of new cases in Europe and the U.S. is expected to gradually peak and reach a turning point, but the outbreaks have just started in other places.

“Assuming it can be contained in three to four months, it will be at the end of summer. But after the fall, the second wave could come. There is a high probability of a second international outbreak,” he said.

Dr Zhang, who is also the director of the infectious diseases department at Huashan Hospital of Fudan University in Shanghai, added that “although China has made some achievements in the earlier stages, we need to remain prudent and determined to fight the pandemic for an extended time.” 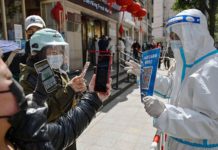