The prime minister has said he was ‘having to wear glasses for the first time in years’ after suffering coronavirus.

Boris Johnson told today’s Downing Street press conference: “I’m finding that I have to wear spectacles for the first time in years – because I think of the likely effects of this thing – so I’m inclined to think there’s some … I think that’s very, very plausible that eyesight can be a problem associated with coronavirus.”

He spent several nights in intensive care battling the disease at the beginning of April.

His comments come after top adviser Dominic Cummings said he made a 60 mile round trip to Barnard Castle in Durham to check if his eyes were good enough to drive back to London.

Mr Cummings made a statement to the media this afternoon defending himself for leaving London to travel to Durham when his wife became unwell.

He said he had fallen ill with ‘Covid symptoms’ of a headache and fever the day after arriving in Durham. After recovering, Mr Cummings said he got expert medical advice and was told he could go back to work. But because the virus had affected his eyesight, he said his wife did not want to risk the drive back to London and they agreed they should go for a short drive.

Mr Cummings added: “My wife was very worried, particularly as my eyesight seemed to have been affected by the disease. ‘She did not want to risk a nearly 300-mile drive with our child given how ill I had been.

“We agreed that we should go for a short drive to see if I could drive safely, we drove for roughly half an hour and ended up on the outskirts of Barnard Castle town.” 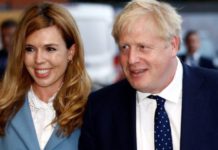