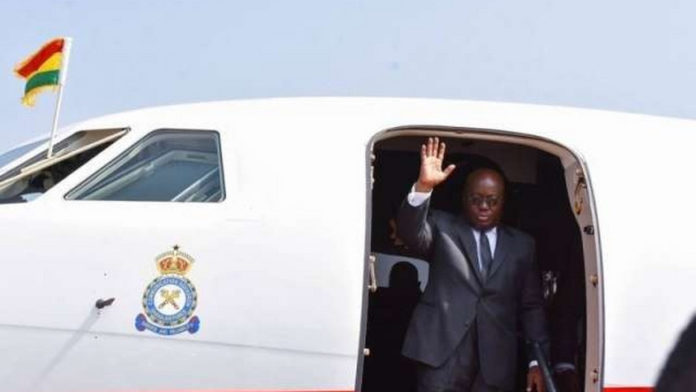 Member of Parliament for North Tongu, Samuel Okudzeto Ablakwa, has accused President Nana Akufo-Addo of ostentatious spending even as the country goes through economic hardship.

Mr Ablakwa said per his personal findings and calculations, the accumulated cost of flight travel by the President during his 10-day visit to France, Belgium, South Africa and back to Ghana, is a whopping £345,000 i.e. GHS2,828,432.80 at current exchange rate.

“Per Flightradar24, the G-KELT aircraft left Accra with the President to Paris on the 16th of May — a six and half hour duration. Airlifted the President from Paris to Johannesburg for 11 hours on the 23rd of May.

According to him, “President Akufo-Addo, [who] has been a leading voice for debt forgiveness in the international arena, has been imposing additional regressive taxes back home, with the justification that the economy isn’t in a good shape.

“Sadly, he consistently fails to lead by example in a period of austerity where his government is appealing to struggling public sector workers to lower-wage increase expectations.”

Mr Ablakwa’s concerns, communicated through an opinion piece copied to the media, stems from President Akufo-Addo’s decision to charter a “top-of-the-range luxury aircraft” rented by Acropolis Aviation at £15,000 per hour.

This, he described as outrageous since Ghana already owns an aircraft, which is in perfect working condition.

“It would have cost Ghana less than 15% of this 2.8 million Ghana Cedis,” if the Presidential aircraft was used.

“The irony is that President Akufo-Addo engaged in this fantastic extravagance on his way to France to go beg President Emmanuel Macron for debt cancellation. Needless to add that President Macron does not travel in such splendor,” he opined.

Mr Ablakwa noted that such lavish spending in such a period of austerity sends the wrong message not only to the foreign powers whom the President was beseeching for debt cancellation, but to the Ghanaian citizens who, in recent times, have been agitating for #FixTheCountry.

“I have, therefore, filed an urgent question in Parliament to compel the Akufo-Addo administration to be accountable to the Ghanaian people on this matter and ultimately to prick their conscience to end this obscene profligacy at this time of considerable economic hardships,” he concluded.

The President’s 10-day working trip was part of efforts to re-engage with the rest of the world after the onset of the Covid-19 pandemic and highlight Ghana, once again, as a country with an impressive business-friendly atmosphere as well as bright economic prospects for the future.