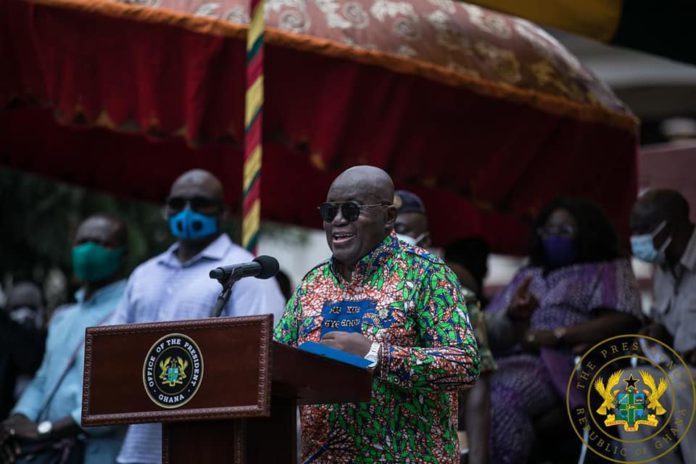 President Nana Addo Dankwa Akufo-Addo has revealed that work on the $330 million concession Boankra Inland Port is due to start in November.

He said the long delayed project will be commenced under his government.

Akufo-Addo assured the people who were at a durbar when he paid a courtesy call on Asantehene Otumfuo Osei Tutu to seek his blessings and support ahead of the 2020 general elections.

“God willing in November, the Boankra Inland Port which has been on the drawing table for generations will be constructed. Parliament has approved $330 million concession for the developers to work on the port and they are made up of Koreans and Ghanaians.

“The Korean developers will arrive in early November to start work. That is when I will come to cut the sod for the project,” he said.

The flagbearer of the New Patriotic Party (NPP) appreciated the people for their support of his political ambition assured them of more developmental projects in addition to the existing ones should his government retain power.

“Thank you for your help in the past. In 2016, I promised Otumfuor that if God permits and the people of Ghana vote for me, I have a lot of plans for the nation which I have fulfilled.

“I would like to call on you to support me this year as well. Everywhere you go, people can attest to the fact that Akufo-Addo has worked to help the Ashanti region and Ghana as a whole,” he touted.

At the event, he introduced the party’s parliamentary candidates and urged the people to vote for them as well.

Meanwhile, he stated that his government is committed to completing the 111 health facilities which were promised across the country following the outbreak of Covid-19.

He said the disease had exposed the problems with the nation’s current health delivery system.

The Ghana Shipper’s Authority (GSA) in partnership with the Ghana Ports and Harbours Authority (GPHA) have worked with the private sector to establish the Boankra Inland Port near Kumasi in the Ashanti Region.

This infrastructure would link the ports of Tema and Takoradi to the inner parts of the country and the landlocked countries of Burkina Faso, Mali and Niger.

Upon completion, it expected to be a free port that would combine unimodal and inter-modal operations aimed at easing congestion at Ghana’s seaports thus facilitating the transit trade of the country’s land-locked neighbours.