“If this same Kwasi Nyantakyi and the rest had allowed the Public Interest Committee (PIC) to function, this situation would have been prevented.

“That is the more reason why I feel sorry for him and the entire members.Ghanaians are really insulting them and calling him [Nyantakyi] names and I feel sorry for him. Today the President of the Republic of Ghana is the one who has reported Kwasi Nyantakyi to the CID, is that interference in sports”, he asked on Accra-based Okay FM. 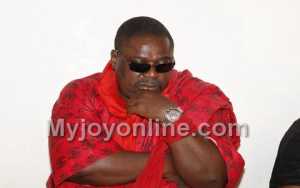 The embattled President of the Ghana Football Association (GFA) Kwasi Nyantakyi has been released on bail by the Criminal Investigative Department (CID) of the Ghana Police Service.

His release comes after police picked him at the airport and subsequently escorted him to his residence to search his premises.

Mr. Nyantakyi handed himself to the CID when he arrived from Morocco Wednesday dawn to answer questions for allegedly using President Akufo-Addo’s name fraudulently.

In a yet-to-be-released video, Nyantakyi allegedly demanded some sums of money from potential investors to facilitate their meeting with the president, the vice and other senior government officials.