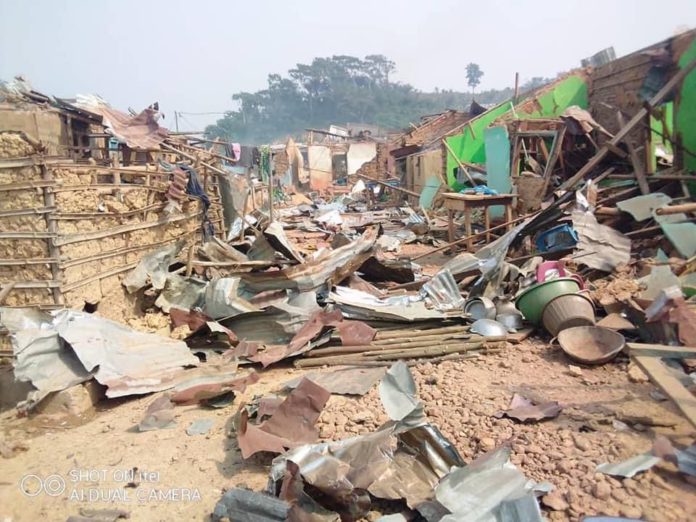 Victims of the January 20 explosion at Apiate in the Western North Region are demanding timelines for the completion of their would-be new community as the rainy season approaches.

The verbal petition comes as the government takes frantic steps to complete some 86 uncompleted structures originally created for the people of Odumasi, a community sitting on the concession of a mining firm, Future Global Resources.

At a durbar of chiefs and people of the affected community Monday morning, some victims and survivors of the explosion, who are currently seeking refuge in tents and long rooms, demanded timelines for the completion of the project from the Lands and Natural Resources Minister, Samuel Jinapor, who led the delegation.

“We want to know how soon the reconstruction will be completed for us to move in because very soon the rains will set in and that could worsen our plight,”
One of the survivors said.

One opinion leader of the community also made a passionate appeal to pay attention to business owners whose livelihoods have been decimated by the disaster.

“We appeal to leadership to pay attention to those of us who owed businesses prior to the disaster by giving us the needed support to rebuild those livelihoods. We are not asking for too much. We only want the right thing to be done and with some speed,” he said.

Responding to the demands of the people, the Minister promised the people of a model Ghanaian village that will become a center of attraction and reference point for future development.

“We owe it a responsibility to rebuild this community. Let’s support the government’s effort. I heard some of you asking for timelines for completion of your community. It’s a good thing. But if you look around Apiate and its adjoining communities, the special planning is not the best. What government wants to do is to build a model Ghanaian village to become a reference point for future works,” Mr Jinapor said.

He, however, fell short of providing timelines as demanded by the people.

Meanwhile, the chief of the community, Nana Bremebi, sounded optimistic about the fortunes of the community and called on the people to support and focus on the process and not be distracted by negative comments and allegations about the project.