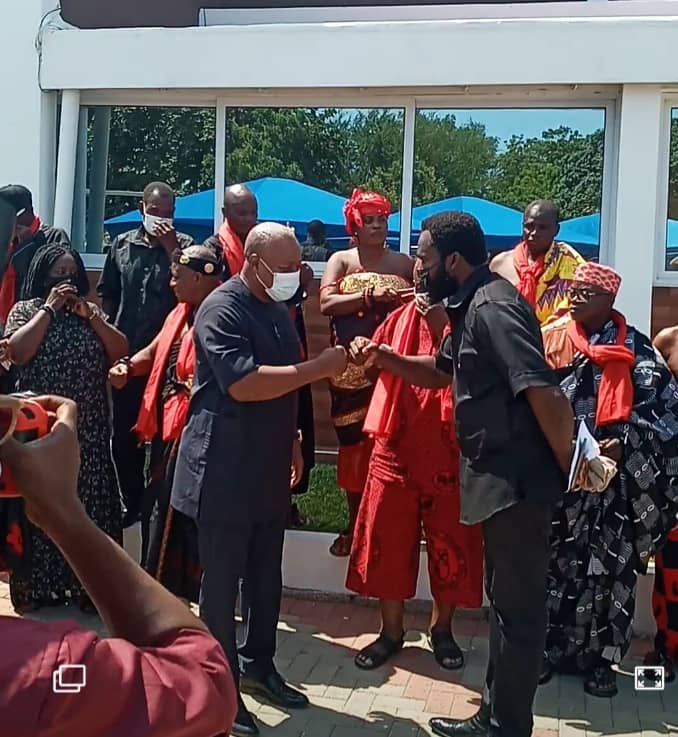 Representatives of chiefs from the Anlo State and the Ave-Tagba Traditional area of the Volta Region and the Agumenu and Allied families have paid a courtesy call on John Dramani Mahama.

With the support of the regional leadership of the National Democratic Congress (NDC), the group met the former President to formally inform him of the demise of the late Churchill Simon Kwabla Agumenu, a veteran member of the party.

The late Agumenu, who is the father of Dr Donald Senanu Agumenu, was an astute Educationist, a Cadre of the PNDC and Secretary and Adviser to the Ave-Tagba Traditional Area. Mr Agumenu was a highly respected man of integrity and a source of wisdom to many beyond the region. He was the family head of the Agumenu family.

President Mahama, in his remarks, expressed his warm and sincere condolences to the chiefs and the bereaved family, especially Dr Agumenu.

President Mahama further praised the late Agumenu for his services to the PNDC/NDC and the nation at large.

President Mahama expressed his readiness to ensure his outfit and that of the party leadership are well represented to give a befitting farewell to the late Agumenu.

The funeral service has been slated for Saturday 22nd May 2021 at Ave-Hevi in the Akatsi North District of the Volta Region.