Some angry youth have reportedly gone on the rampage in Yendi over what they say is a snub of their Member of Parliament for a deputy ministerial position.

The group says it suspects that the President may not appoint Farouk Aliu Mahama as a deputy minister in his government.

Adom News correspondent, Illiasu Abdul Rauf who was at the scene of the protest has reported that the youth burnt tyres to express their displeasure.

Given the votes the ruling New Patriotic Party (NPP) got in the constituency in the 2020 elections, a deputy minister position, the youth said, should be the least to show appreciation for their support.

Illiasu said the youth claimed their MP’s name is missing in the deputy ministerial list making rounds in the media.

The youth have threatened that until Farouk Aliu Mahama is appointed, they will continue with their destruction. 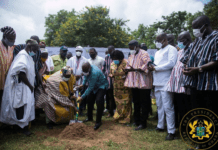