A Nigerian actor based in India, Chekuwame Malvin, has been arrested by the Bengaluru police on Thursday, September 29, for allegedly peddling drugs in India.

Mr Malvin, who played the role of a drug trafficker in the south Indian movie ‘Singam 2’, was caught red-handed by the police when the accused was allegedly peddling narcotic substances to students and some businessmen in the city.

Telangana Today reports that the police recovered 15 grams of MMDA commonly known as “ecstasy” or “molly”, 250 ml of hashish oil — all worth Rs 8 lakh along with mobile phones and cash of Rs 2,500.

A case has been booked against the accused under the section of Narcotics Drugs and Psychotropic Substances Act 1985.

Inquiries revealed that he had come to India on a medical visa but then enrolled in the New York Film Academy in Mumbai to learn acting.

According to the police, he had completed a six-month course in acting from the same academy in Abuja in Nigeria, The Hindu reports. 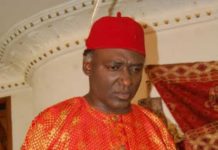 Veteran actor calls for prayers as he undergoes critical surgery