Members of the #FixTheCountry movement have hit the streets of Accra to protest against some policies in the 2022 Budget.

According to leaders of the social advocacy group, certain aspects of the Budget are inherently “ridiculous”, hence their decision to protest.

Clad in red and black outfits, they poured out on the streets to register their displeasure particularly with the 1.75% Electronic Transaction Tax (E-levy).

The protest began from the Tema Station in Accra, near the National Hockey Stadium, after which the protesters marched to the Parliament House to present a petition.

The police were also in attendance to ensure a peaceful process and provide maximum security as the protesters chanted we won’t pay e-levy tax.

The campaigners, during the protest, called on the government to account for projects it has undertaken so far.

The Finance Minister, Ken Ofori-Atta, on Wednesday, November 17, presented the 2022 Budget estimates to Parliament for approval.

As part of his presentation, he indicated that government wants to abolish all road tolls and impose a 1.75% E-levy on all electronic transactions.

These two items in the Budget have since sparked series of debates in public discourse, with many splitting hairs on the said proposals, amongst others.

This follows a similar protest by the group in August 2021 to drum home concerns about the state of the economy.

The campaigners had in the last few months agitated on social media demanding that the government addresses challenges that have for years bedevilled the nation. 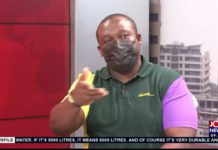 The state overreacting in arrest of Barker-Vormawor – Sam George