A 13-year-old girl has drowned at Dagbebu-Gbeniyi while returning from the Gbeniyiri market yesterday, September 14.

Elizabeth Kambatuu, a class 4 pupil of Sawla St Augustine’s R/C Primary School, is said to be the only person who drowned after a boat carrying over seven persons capsized.

Residents were able to save all passengers on board, but she could not be traced as at that time.

She is said to have left home to take advantage of the Gbeniyiri market day, though her permission from her mother was declined.

The mother of the victim, Juliana Kambatuu, told Adom News’ Rebecca Natomah that she felt uneasy when she returned home to meet the absence of both the girl and her sister, as it was heavily raining.

She added that she put a call through to inform them not to head home until the rains were over and the flood had subsided.

Despite several warnings from witnesses including a motor rider Madam Kambatuu sent to trace her, she is said to have joined the boat.

Upon getting to the middle of the journey under a bridge, the boat is said to have capsized and a rescue team did its possible best to save the victims.

She was, however, missing but her body was discovered hours later, in the morning of September 15.

Madam Kambatuu added that she was immediately buried, and the final funeral rites would be performed in the Upper West Region.

Meanwhile, the Assemblyman for Gbeniyiri-Dagbebu electoral area, Clement B. Nakoh, has appealed to the District Chief Executive and Member of Parliament for Sawla, Andrew Chewintey, to help reconstruct the bridge and the Sawla Gbeniyiri-Dagbebu roads. 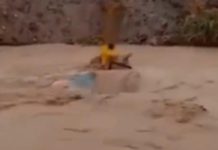